Cabins of Birch Hollow is excited to learn that Southeastern Kentucky is among the first five of twenty areas in the country to be part of President Obama’s Promise Zones Initiative!! Eight counties in Southeastern Kentucky are included in the targeted areas. The announcement was made as part of the 50th anniversary of the War on Poverty, one year after the President shared this vision with the nation in his 2013 State of the Union. Although these counties are located south of Birch Hollow, which is located near the Kentucky Rockies, the Daniel Boone National Forest, the Red River Gorge, and Natural Bridge, we hope that partnerships will be developed to bring about a surge in economic growth for all of Southeastern Kentucky. For our current and future guests at our 10 premiere cabins in Stanton, KY, this means even more wonderful things to do and places to see when you come to hike, kayak, sight-see, or just get back to the beauty of nature in the wild.

Read more about it below: 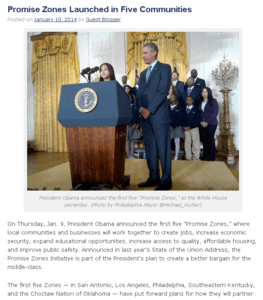 On Thursday, Jan. 9, President Obama announced the first five “Promise Zones,” where local communities and businesses will work together to create jobs, increase economic security, expand educational opportunities, increase access to quality, affordable housing, and improve public safety. Announced in last year’s State of the Union Address, the Promise Zones Initiative is part of the President’s plan to create a better bargain for the middle-class.

The first five Zones — in San Antonio, Los Angeles, Philadelphia, Southeastern Kentucky, and the Choctaw Nation of Oklahoma — have put forward plans for how they will partner with local business and community leaders to make investments that reward hard work and expand opportunity. Click here for a fact sheet on the Promise Zones Initiative and the key strategies of each of the five Zones.
“In a country as great as this one, a child’s zip code should never be what determines his or her opportunity,” said Domestic Policy Council Director Cecilia Muñoz in a White House blog about the new initiative. “The government can’t fix this on its own, but it can be a much better partner in helping local leaders develop policies that improve education, protect the most vulnerable, and encourage the entrepreneurial spirit.”

In three of the Zones, OII’s Promise Neighborhoods will play an important role as one of the added community tools resulting from the Administration’s place-based investments. In Los Angeles, for example, the Promise Neighborhoods initiative will be instrumental in expanding a full-service community schools model from seven schools to all 45 Promise Zone schools by 2019. The other Promise Neighborhoods playing integral roles in the new Zones are in San Antonio and Southeastern Kentucky.
Read the original article here: http://www.ed.gov/edblogs/oii/2014/01/promise-zones-launched-in-five-communities/

If you have never been to the Red River Gorge and Natural Bridge, check out our cabins at Cabins of Birch Hollow and come witness for yourself the revitalization of this beautiful part of the Kentucky Rockies!  We will share more with you in the weeks ahead, as details unfold!