Happy 4th of July! Or Happy Independence Day! However you wish to say it, it all means the same.

Here in the US, most people celebrate today with picnics, cookouts, and fireworks with friends and family. And most don’t even think about what this holiday should mean to them.

What does this holiday really mean to you?

On July 2, 1776, the Continental Congress had voted to declare American independence from the British Empire. The widespread assumption is that the Fourth of July is the day the Declaration of Independence was signed, the actual moment the founders pledged their lives, fortunes and sacred honor to the great question of Independence.

There was no singular moment when all the delegates signed the document. Most put pen to parchment on Aug. 4. (It had taken some time for the final draft to be “engrossed” — formally hand-copied.) Some signatures were added as late as November.

So, why do we celebrate on the Fourth? Because that is the day the declaration was sent to the printer, who then put that date on the top of the document, copies of which were distributed throughout the colonies and beyond. It became the date that readers then, and Americans ever since, recognized as the anniversary of American independence, even though nothing of historical significance actually occurred on that day.

We celebrate the Declaration of Independence for two reasons. It represents an official severing of ties between the original 13 colonies and the rule of Great Britain. But it also represents the core of our beliefs, the very makeup of our identity as citizens of the U.S. 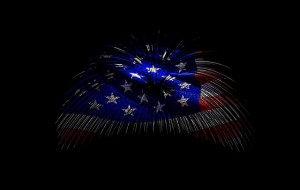 The U.S. has made consistent strides to truly embody the words, “we hold these truths to be self-evident, that all men are created equal…” This idea has emboldened us to forge our own paths as individuals and as a nation. At great risk have Americans stood up to many forms of tyranny and oppression, and however long it takes, liberty prevails.

We hold these truths to be self-evident, that all men are created equal, that they are endowed by their Creator with certain unalienable Rights, that among these are Life, Liberty and the pursuit of Happiness.

I, for one, am proud to be an American. In a country that does not oppress their people, where women and children are not considered property and where each person has the freedom to chose their life dreams.